Thangbi Mani Tour is an itinerary whose highlight is the Thangbi Mani festival celebrated in Thangbi lhakhang in Thangbi village, Chhoekor, Bumthang. The Lhakhang was built by the 4th Shamar Rinpoche, Chhoki Drakpa, the Red Hat Karmapa. The festival showcases the rich tradition and celebrates the cultural heritage of the temple. This annual festival is celebrated from 14th to 17th day of the eighth month of the Bhutanese calendar. The festival is an important event for the people of Thangbi, Goling and Kharsath villages and is organized by them.

Apart from the Thangbi Mani festival the itinerary also includes walks, hikes, local interactions, and experiences in all the places that come across as we drive to the Thangbi village in Bumthang. It can produce a perfect Bhutan travel experience.

Details about the package

International Travelers
(All nationalities other than regional travelers)

Discounts available
write to us at idealtravelcreations@gmail.com

The cost does not include the following:

The panoramic Himalayan views shall be mesmerizing as you fly to Bhutan. The Landing is another experience.

On completion of immigration formalities, your guide from Ideal Travel Creations shall welcome you with a “Tashi Khadar” on your exit from the Airport gate. Drive to Thimphu. Discover the barren mountains, Tamchog Lhakhang, the Paro River (Pa Chhu) joining the Thimphu River (Wang Chhu) at Chhuzomsa and the three stupas as you drive the well-maintained road between Paro and Thimphu.

Lunch at Thimphu. You may choose to relax at hotel or walk around the Thimphu town. In the evening, explore the craft bazar and the centenary farmers market. A private traditional cultural show before dinner. Overnight in Hotel in Thimphu.

In the morning, visit the National Memorial Chhorten. Located in Doeboom Lam, it was built in 1974 in honor of the Third King of Bhutan. Drive to Kuenselphodrang, where used to be the palace of the Sherab Wangchuk the thirteenth Druk Desi. The construction of A Gigantic Statue of The Great Buddha Dordenmawas started in the year 2006 to celebrate the 60th anniversary of the Fourth King of Bhutan. The construction completed in 2015. The Kuenselphodrang Nature park opened in 2011 adds to natural value and beauty of this place. On the way back visit the Hindu Temple formally known as Devi Panchayan Mandir which was consecrated on 1st October 2019. His Majesty, The King Jigme Khesar Namgyel Wangchuck offered worship and granted “Tika” to the Hindu Communities on the Dussehra of 2019 in this temple. Visit the Changangkha Lhakhang, a temple complex on a ridge overlooking Thimphu valley. The temple was founded in the 13th century by one of the sons of Phajo Drugom Zhipo. It is customary that all the children born in Thimphu is taken to the temple for blessing. Finally visit Simply Bhutan. This is the first living museum in the country. It depicts ancient Bhutan and the Bhutanese ways of life in the ancient times. It has an altar, a photo studio, a Zhabdrung museum, a traditional Bhutanese kitchen, demonstration stalls of textiles and handmade products and cafe offering butter tea Suja, snacks and a souvenir shop.

Afternoon, visit the Takin Preserve Centre. Takin is the National animal of Bhutan. Then visit the Institute of Traditional Medical Services which was first established as an “Indigenous Dispensary” in 1968 at Dechencholing, Thimphu as directed by the Third King of Bhutan. Visit the National Institute of Zorig Chusum. Students are taught the 13 traditional arts and crafts of Bhutan in the institute.

In the evening visit the Tashichhodzong, which has been the seat of the Government since 1952. It houses the Office of the King of Bhutan, the throne room and the offices of certain secretariat and Ministries. The dzong also constitutes a monastic body.

As you drive towards Punakha, you shall first see the Simtokha Dzong and then the winding roads leads you through blue pine forests and the villages of Hongtsho (2890m) and Yusipang. The local villager sell apples, walnuts, dried cheese in this area. The road climbs through the forest till you reach the Dochula Pass at 3150 m. Enjoy the breathtaking views of the higher Himalayas and visit the 108 Druk Wangyal Chhortens. Follow the road downhill, vegetation now changes from oak, maple, and blue pine to a forest of Hemlock, fir, Rhododendron, alder cypress, etc. leading you to the Royal Botanical Park and then slowly descends towards Thinleygang. The wind gets warmer and the vegetation is mostly of cactus, oranges, bamboo, pine and paddy fields. Check in Hotel and relax for a while.

After Lunch, visit the Punakha Dzong, built by the Zhabdrung Ngawang Namgyal in 1637 at the junction the Pho Chhu and Mo Chhu Rivers. Visit the longest suspension bridge in Bhutan. Explore the villages.  Then, take a short and easy hike through paddy fields and villages to visit the Chhimi Lhakhang. This temple is also known as the temple of fertility and was built by Lama Drukpa Kuenley in the 15 century. Lama Drukpa Kuenley is also known as the Divine Madman. If you are interested in rafting, you could choose to do the same in Punakha at an extra cost. Dinner and overnight in hotel.

After breakfast, hike to Khamsum Yulley Namgyal Chhorten.  Take a short drive to the base and then walk through paddy fields before you climb a moderately inclined trail surrounded by pine trees. The hike is amazing and the views from the Chhorten are absolutely thrilling.

Freshen up and drive to Gangtey/Phobjikha in the afternoon. Drive along the slopes of bare hills following the river (Drang Chhu) until you reach Chuzomsa, (the confluence of the Dang Chhu and the Pe Chhu). After crossing the bridge the road goes uphill through pine forests often encountering small villages, where women spinning yarns on their porches, older men idling their time and children frolickingaround could be the most common sights. Stop at places and never miss a chance for a good photo or sight. Dinner and overnight in hotel.

A private walk in the morning could be a good option to see the mists hanging low and the waking up of the valley. (Subject to weather conditions) After breakfast, explore the Phobjikha Valley, the most beautiful glacial valleys in Bhutan and the winter roosting place for the endangered black necked crane. A must visit place in Bhutan.

Activities for the day

A leisure breakfast with a view of Phobjikha Valley. Drive to Trongsa. Stop at Pelela Pass (3420 m) with the customary Chorten and long colorful flags covering the hilltops. You shall also find stalls selling local handicraft items including products made from Yaks by the semi Nomadic tribes in the region. Drive downhill as you are greeted by beautiful views of admirable landscape, villages, Yaks (subject to season), until you reach the Chendebji Chhorten. It was built to subdue evil spirits in the style of the great Boudnath Chhorten of Nepal. Visit the Chhorten. After driving for approximately 1 – 2 hours you shall see the view of the impressive Trongsa Dzong. Visit the Trongsa Dzong, one of the most impressive Dzong in Bhutan. The Dzong was built by Chogyal Minjur Tempa, the official who was sent by Zhabdrung to unify Eastern Bhutan and enlarged at the end of the 17th century by Desi Tenzin Rabgay. Trongsa Dzong is the ancestral home of the present Royal Family. The first two hereditary kings ruled Bhutan from this Dzong. Then visit the Ta dzong, an ancient watch tower which is now converted into a museum. It represents a tasteful blend of tradition and modernity. The Museum has around 224 items on display.

After lunch drive to Bumthang via Yotong La Pass (3425 m), marked by a Chhorten and prayer flags. Drive down the Pass through Rhodendrons and different types of pine forest until you reach the plains of Chhumey Valley. While in Chummey valley stop to visit the Yathra Weaving Factory. Interact with the weavers. You may opt to try the loom on your hands. Yathra is a hand woven fabric made from the wool of sheep or Yak. It is a famous textile product of Bumthang. The Yathra cloth is made into scarves, jackets, table cloths, bags, etc. Most of the women in this valley, especially in Zungye village earn their lively hood by weaving Yathra which is supplied to various towns in Bhutan. Explore the Chamkhar town. Dinner and overnight in hotel.

In the morning, drive to Thangbi Lhakhang and witness Thangbi Festival, the highlight of this itinerary. (Whole day)

In the morning, drive to Thangbi Lhakhang and witness Thangbi Festival.

Afternoon, visit Kurjey Lhakhang and Jambay Lhakhang. Kurjey Lhakhang was named after body print of Guru Rimpoche and is one of the oldest temples in Bhutan. Jambay Lhakhang was built by King Srongsen Gompo of Tibet. One of the most spectacular festivals, “Jambay Lhakhang Drup” is staged here.  Then visit the Jakar Dzong (literally meaning the Castle of White Bird). The current structure was built in 1667. Finally drive to Tamshing village, explore the village, and visit the Tamshing Lhakhang, one of the oldest Monasteries in Bhutan. Then visit the Bumthang Cheese factory and Brewery. This is a small-scale, mostly handmade factory based on the raw materials supplied by the local farmers. It is nice to see the hand work aspects of bottling, labeling, capping. Try the craft beer and Red Panda, a Weiss beer.

After breakfast, drive to Bathpalathang Airport and then fly to Paro Airport. The views from the flight shall be mesmerizing.

After lunch, the following activities awaits you.

After breakfast, Hike to the Taktshang Monastery, the abode of gods and monks and a must visit sight while in Bhutan. Taktshang Monastery was built surrounding Guru Rinpoche’s Meditation cave in the 1684 by Gyaltse Tenzin Rabgay. This incredible monastery clings to the edge of a sheer Rock cliff that plunges 900 meters into the valley below. Legend has it that Guru Padmasambhava flew here on the back of a tigress which gives its name “Taktshang” meaning Tiger’s nest.

Afternoon, Visit the Kyichhu Lhakhang which is a majestic 7th Century temple revered as one of the most magnificent sites of worship in Bhutan. Finally visit a village house, relax in traditional hot stone bath known as Dotsho in local language. It has been practiced in Bhutan for centuries as a medicinal soak. River stones are heated and then put in water to heat the water; sometime medicinal herbs are added to the water before it is ready for the soak. You shall be served with the local Bhutanese alcohol (Arra). You can also experience the traditional archery and National Dress. Dinner and overnight in hotel.

After breakfast, Drive to airport and bid farewell to Bhutan. 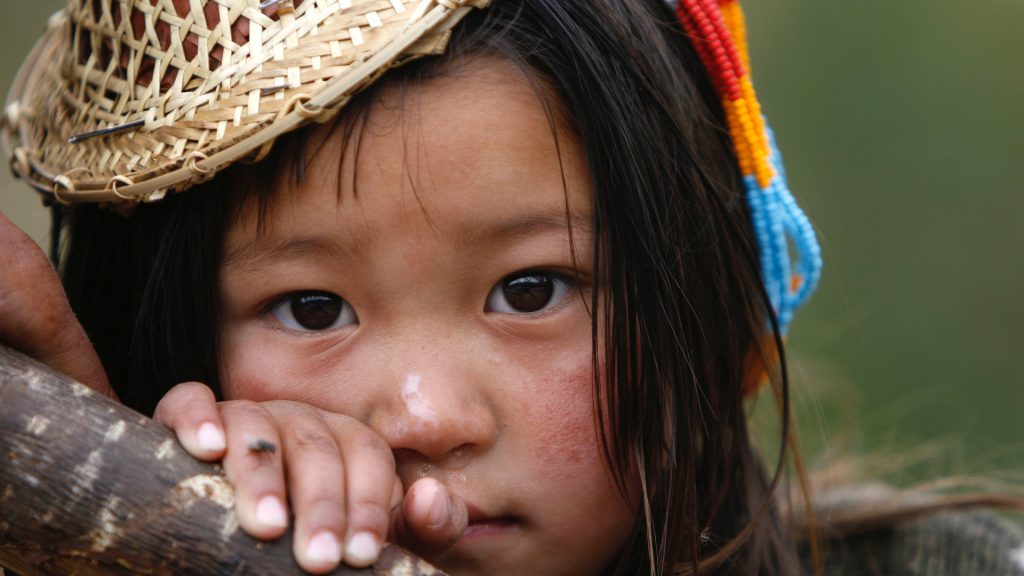 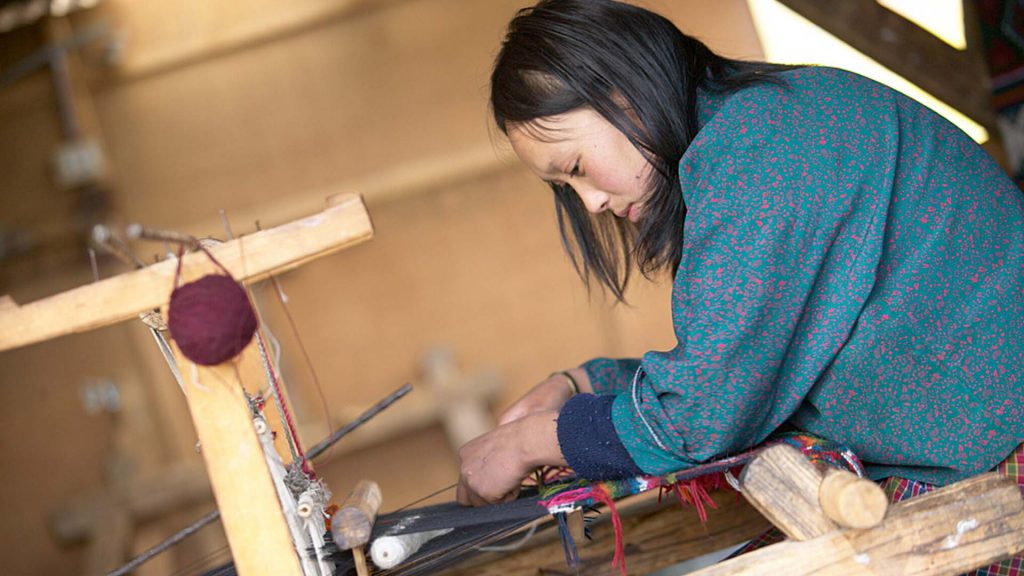 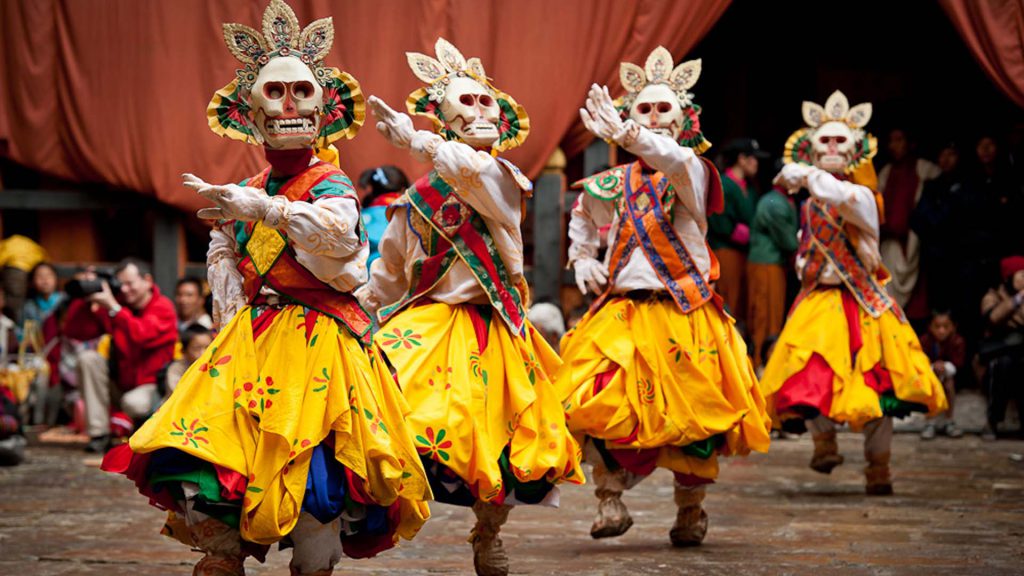 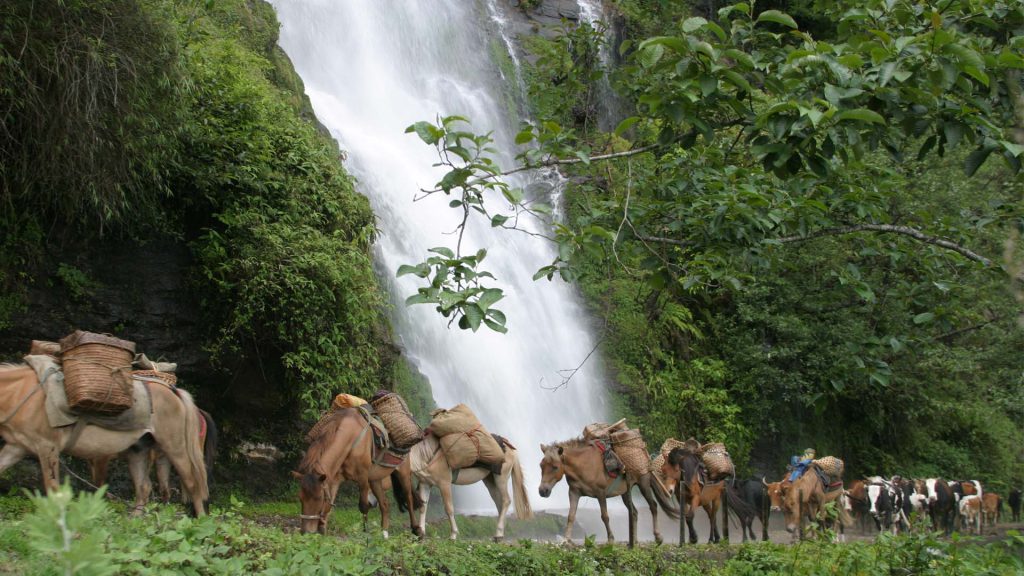 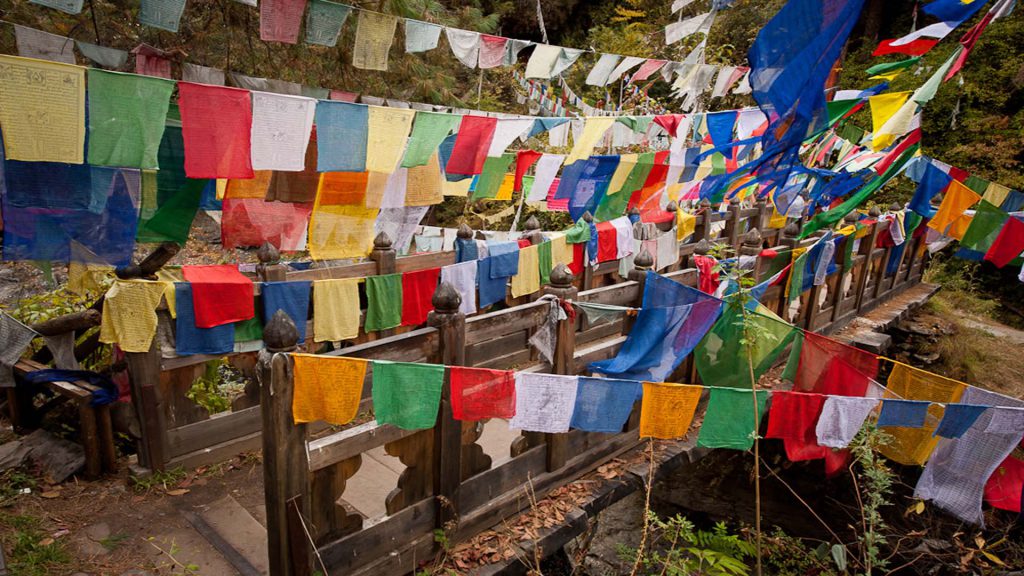 A Photo Journey in Bhutan 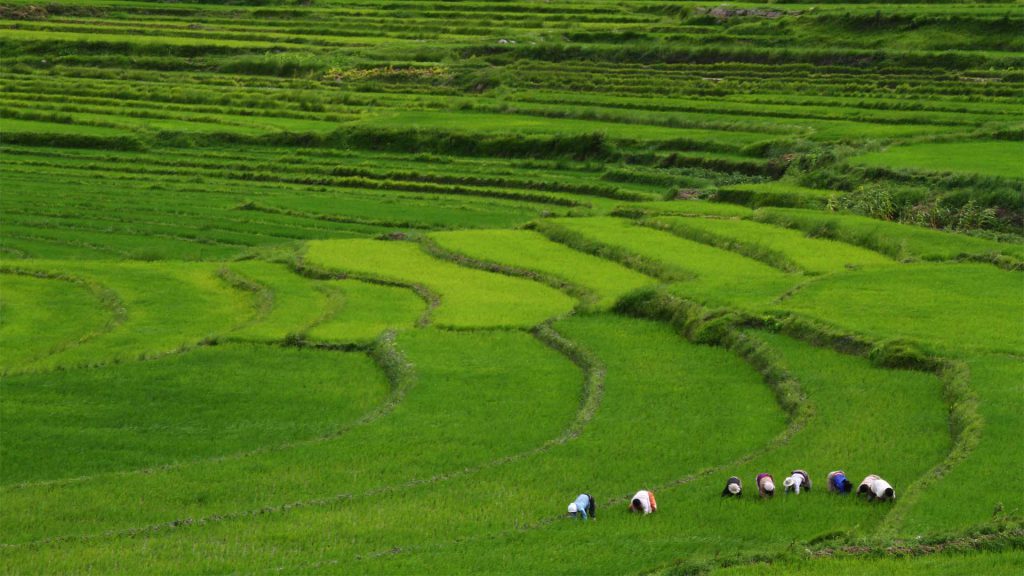